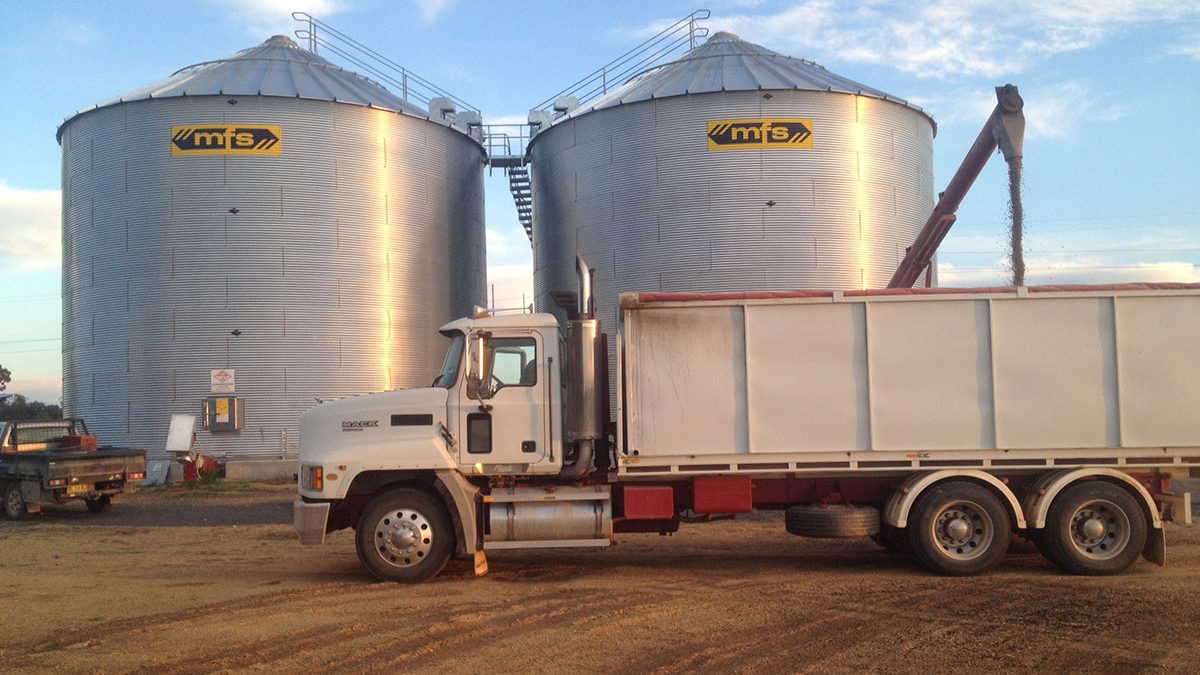 How Geoff enhanced longevity and marketability

In partnership with his wife, Alison, Geoff Bergmeier manages a mixed grain and livestock enterprise near Lockhart NSW. Their main grain production comes from canola, wheat and faba beans.

“The key is keeping costs down whilst maintaining efficiencies.”

“At the end of the day, you’ve got to stay viable,” said Geoff.

Raising his family against the backdrop of the countryside is what Geoff loves most about his lifestyle and business. Geoff stored grain in small cone silos with low capacity, but soon realised this was the limiting factor to carrying grain for longer and enjoying greater market power.

“Grain markets take a while to improve, which means you might do better storing for longer and selling later. That’s what our silo system from Allied Grain Systems enables us to do.”

Whilst storing grain for longer was a priority, so was maintaining the top quality of his grain. Coupled with world class aeration, a custom vac aeration controller and fumigation recirculation Geoff found that with Allied.

“Fundamentally, Allied ticked the boxes in the areas I felt were important,” says Geoff.

A nice touch for Geoff was knowing that his silos would be safe and easy to use. The new system, while larger than the Bergmeier’s original setup, incorporates features which have made the transition a straightforward one.

“We opted for the addition of a spiral staircase to join the two silos together which makes for easy access and maintenance.”

When asked about the move to grain storage in the industry, Geoff comments, “It’s a reflection of the way the grain industry has moved over time, it’s gradually changing.”

There’s no doubt Geoff has positioned his business ahead of the curve with capacity to store a generous 2,500 tonnes.

By investing in the right grain storage for his unique situation, Geoff takes advantage of market forces which were previously less flexible.

“Some grain markets take a while to improve,” he says, “which means you might do better storing for longer and selling later.”

“It’s all determined by the market at the time,” says Geoff, “what grains we’re going to produce and what’s necessary to carry for a longer period of time.”

With so many competitors offering storage solutions, how did Allied make the grain in Geoff’s decision-making process?

More than delivering on product it was the time and personal attention from Brian Smith, Allied Grain Systems’ On-Farm Storage Manager, which really won Geoff over. Taking Geoff out to see other customers’ silos to see the finished product in practice and gave Geoff an idea of how Allied could help his business made the decision-process simple.

“It was clear they were happy with the job that was done.”

“I thought it looked well-constructed and would work well for my business.”

“When someone shows that kind of initiative, well hopefully that will be reflected in their workmanship and the job they do.”

“Look, every system has its flaws and strengths,” says Geoff, “but at the end of the day it’s the person behind it, the service and support you receive and the job that’s performed that counts most.”

Geoff was looking for a storage solution that would complement the system he already had in place. Making that move into larger capacity on-site storage has made it possible for the Bergmeier farming family to enhance their productivity and maximise their profits.

Brian helped Geoff through the entire process, from identifying the business goals, drafting the preliminary design right through to supply and installation of equipment and commissioning. If you would like a FREE consultation with Brain to talk about your specific situation and the different factors to consider in investing in a grain storage system, call 0448 827 473.