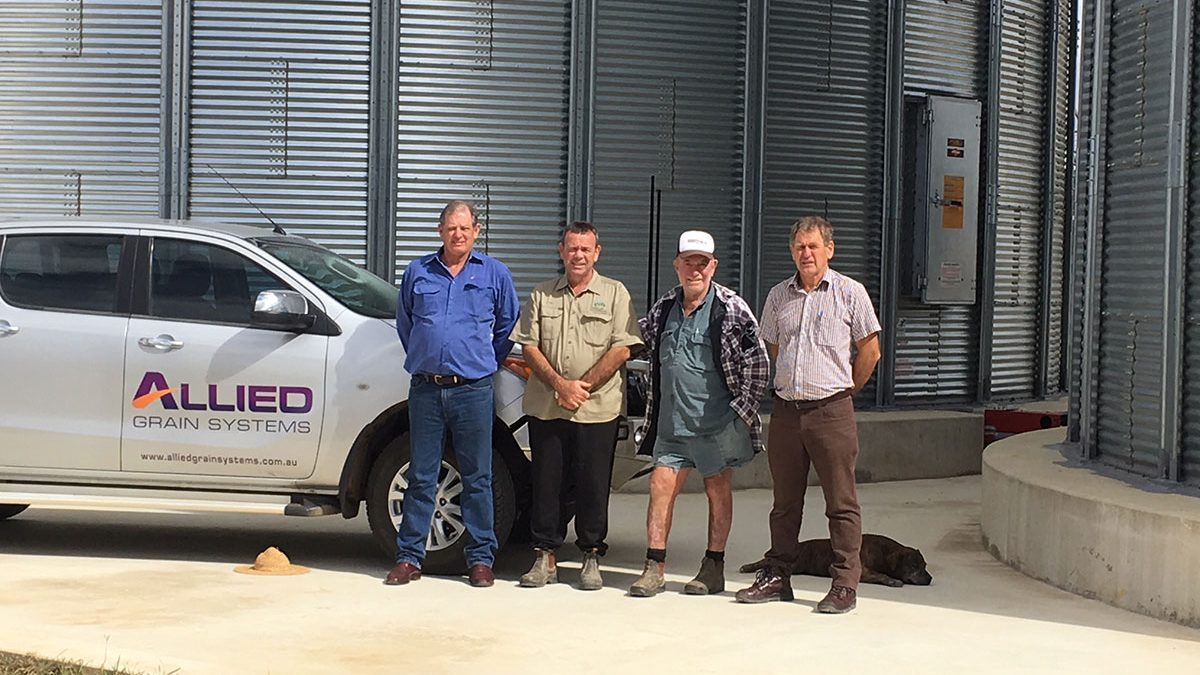 Ian Hill runs 3000 acre Bailey Creek Piggery, a commercial pig farm in North Burnett. The principle owner, he runs his enterprise together with his wife and their four children.

Wheat, barley and corn are Ian’s main sources of grain for feeding the 1700 pigs currently on the property.

A businessman at his core, Ian has his mind set to what will benefit the future of his enterprise. He realised that the farm’s inadequate storage infrastructure was inhibiting the growth of his business.

“We’d outgrown our current facility; we had about 1000 tonnes of grain storage in 100 tonne silos in a small little build and we just outgrew it because it got old and too small for the size of our business.”

Ian stored 1000 tonnes of grain in 100 tonne silos on his property, with around 4000 tonnes held in other people’s storage facilities. However he was growing frustrated with the inability to be in control of his own grain storage.

“It’s certainly made it a lot easier to source grain, and we have a weighbridge as part of the facility now so the farmer can bring the grain straight into the build.”

“Or we can buy straight off the farm and store grain straight from harvest. “

“That’s probably the biggest thing, that we’ve got total control over our own grain storage. We’re not relying on a third party to do it for us.”

When it came to looking at a new grain storage system, Ian wanted to have all his grain readily accessible. He wanted a solution that would hold a vast amount of grain and make his life easier.

“I got a recommendation from a fellow pig producer. He’d already done the research and he told me that Allied Grain Systems were the best in the industry.”

Aside from enabling him to store a whopping 9000 tonnes of storage completely on his property, there was another factor which made Ian’s choice a lot easier – most silos available on the market did not meet Australian seal standards.

“One of the reasons I chose Allied was because of their ability to seal a silo.”

“That was quite important to me, particularly for weevil control.”

“They had a good product that was a sealable silo, maybe one of the best sealed silos in Australia.”

“The other reason was that they offered a grain loop, which makes the handling of the grain very easy as well.”

“We can move the grain very easily from one silo to another.”

A worthwhile long term investment, Ian is looking forward to seeing his silo pay back over the years in enabling him to store grain at harvest and buy his grain at the right time. Bought at the end of 2017, Ian credits Allied Grain Systems with not only a superior product but excellent customer service to boot.

“We’ve had a very good experience with the Allied team.”

“Their back up support has been excellent.”

“There were a few little things that weren’t quite right but the guys have just been back up to sort it. That’s probably the biggest thing, that we’re still getting support with the product even after they’ve sold it.”

“Anyone can come and build a silo, but maintaining it, following through and making sure the product’s right after that point, that’s what I would recommend Allied on.”