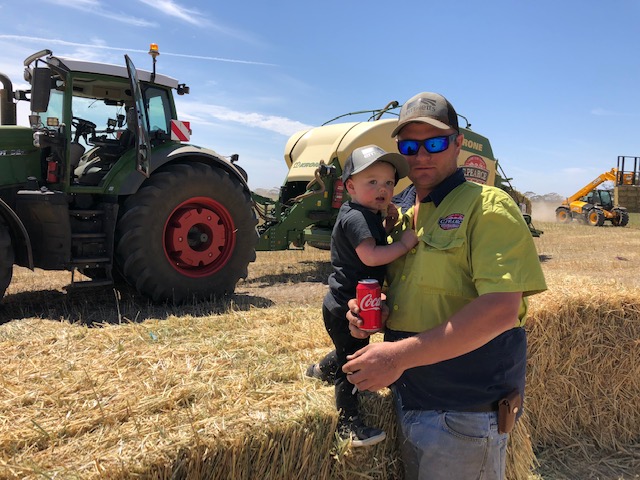 Coby is a little different to our previous Mates in Grain features – he grows hay!

Located in Swan Hill, Victoria, Coby has worked in the Ag industry for the last 20 years since leaving school. Between managing multiple farms and doing his own contracting on the side, he eventually decided to run his own farm and make his contracting business his main job.

That was two-and-a-half years ago. Today he owns his first farm!

He also manages a hay baling company that sells through private buyers and shares.

He grows thousands of tonnes of hay for farmers as well as manages the marketing side, with the hay that isn’t being bought going to his 550 lambs. The best part about the job is seeing how happy the farmers are with the fruits of his labour.

“We have modern technology that allows us to come in, get the job done, have all the hay stacked up and often sold, without them having to lift a finger,” says Coby.

“We do all the work, and all our clients are happy with our services.”

Marketing and getting paid for the product are the most challenging parts of the job, Coby mentions. While grain has bulk-delivery sites, hay doesn’t, so getting paid can often be difficult through private sales and brokers. He says it’s been a tight couple of years.

The first half of this year’s season was extremely dry, but recently the farm has received up to 40mL of rain which came just at the right time.

“It gives us a bit of promise and enthusiasm for the rest of the year,” says Coby.

How have advances in technology impacted Coby’s farm and the way he works?

Coby says modern technology has made the job a lot easier. They use machines to create artificial dew for the hay bales, and GPS’s for their hay-cutting gear.

“With newer bales you can get a lot more in, eliminating transport costs by getting more weight on the truck,” he adds.

What’s Coby’s favourite way to spend the day on the farm?

His little boy’s helping hands sure do make a great day’s work.

“Jax is only two, but he shows a lot of interest!” says Coby. “Having someone I know I can possibly hand this down to in the future is great.”

What words of wisdom would Coby give to someone just starting out in farming?

For Coby, he had no family farm that was handed down to him and no one to help with money. He just had to work and work to get where he is now – at one point three jobs to save up for the deposit on the farm and the equipment he needed.

“It’s been a long road, but we’ve finally started to get ahead.”

What can Coby rely on his mates for in the Ag industry?

“It’s always good to talk to your mates and find out what they’re doing and if there’s new things happening on their farm – they might have done something you haven’t or vice versa,” says Coby.

“Farming is hands on and the only way to learn is to get out and experience it, get your hands dirty. Ask questions and everyone works together. That’s one thing I’ve always found in the Ag industry.”

Be sure to give a thumbs up to show your support for Coby!