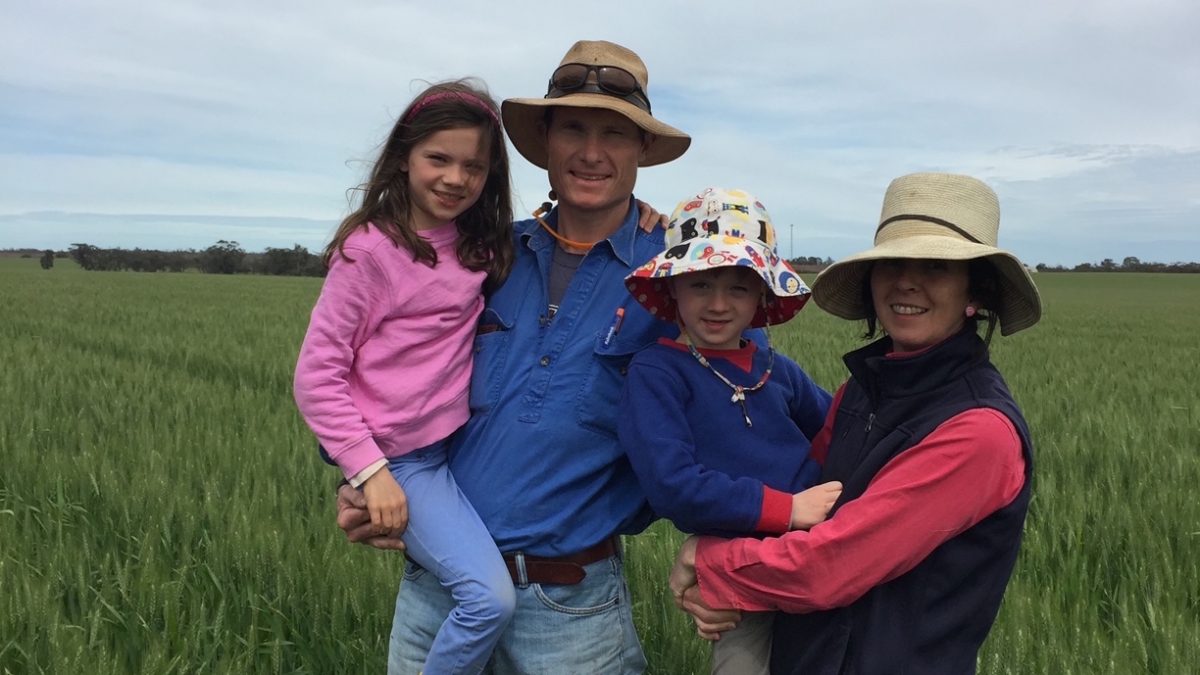 Gavin and his wife Ange run a mixed farming operation in the Riverina region of NSW in Kyalite. The fourth-generation farmers grow wheat, vetch, barely and canola, as well as produce prime lambs.

The pair met at Ag College at The University of Melbourne at Dookie campus. They both completed a Bachelor of Applied Science, specialising in agronomy, cropping and pasture production, and jumped straight into the agronomy industry upon graduating.

With Gavin based in Deniliquin NSW and Ange in Cobram VIC, they utilised the time to gain experience they knew they would need for when they took over Gavin’s family farm, which they did in 2007.

With this background in agronomy, one of Gavin’s favourite things about his life on the farm is watching things grow.

“As an agronomist, you follow all the stages of the crop growth, and each day is a little bit different,” he says. “There’s nothing more rewarding as a producer, whether it’s grain or a lamb, than seeing the product get to the stage where you can sell or market it.”

Weather is the greatest challenge, and they try to utilise the rainfall they do receive with an irrigation system.

“We use flood irrigation to grow crop on to pre-irrigate, and we also grow pasture and grazing crops for the livestock,” Gavin explains. “Unfortunately with the water situation, it’s been one of our biggest challenges going forward with not having water allocation.”

Gavin says by planning the finance side of the business, they find ways to eliminate some risk when it comes to the weather conditions.

Despite 2018 being a very poor year for the family, the end of 2019 harvest turned out a lot better than they expected.

In 2018 they only received 180mm; their average yearly rainfall is 325mm. Because of this they had mostly crop failure, apart from some seed recovery.

“The rain we received in May, June and July was so lucky because it enabled us to get the crops out the ground,” says Gavin. “September and October didn’t deliver much, which are our key months to really grow some good crops and pasture, but we were lucky with what we finished with.”

The farm’s wheat crops averaged at two tonnes per hectare, which, for the amount of rain they received, was a good result. Their yield came out better than they thought, and considering their luck in 2018 they were very pleased with this result.

What’s Gavin’s favourite way to spend the day on the farm?

“I love mornings, especially at this time of the year,” says Gavin.

“With a mixed operation you’ve got a cropping and livestock aspect, so depending on the time of the year and management you’ve got different jobs that need to be done.”

“I do enjoy the sowing time in Autumn, especially if we’ve had some rain and early growth. The paddocks look a lot better if they’re going into moisture.

“I also enjoy the bit of free time I get when driving over the paddocks and having the time to do some planning,” he adds. “We all often rush and do the day-to-day stuff, and it’s nice to take some mental notes and plan for the next few months.”

What words of wisdom would Gavin give to someone just starting out in farming?

Gavin says the biggest piece of advice he can give is for people to always do their due diligence and research.

“When you’re young and have energy, you’re keen to work and get things done, but it’s really important that you take time to do some planning and think about things.

“Whether you’re going into a different enterprise, growing a new crop or purchasing machinery, always do your homework. Talk to your neighbours, agronomists, consultants, other friends in the industry, so when you make your decision you’ve made it with all the information you can.”

What can Gavin rely on his mates for in the grain industry?

“The great thing of having gone to Ag College was that you make such a good network of friends, and we’ve been mates for life,” says Gavin.

“I see them regularly during the year and we’re all involved in the industry. Your mates are your sounding board for information, and it’s great to speak to them and get some reassurance that you’re doing the right thing.

“They’re there to talk to if you’re having a tough time – we all know the challenge.

“I also met Ange at Dookie, so that place will always have a special place in my heart,” he adds.