Josh is a grain farmer from Walgett, New South Wales who runs a mixed farming enterprise covering 17,000 acres. 10,000 acres of this land is dedicated to growing crops, including cereals, barely, wheat, canola, pulses and legumes in rotation.

Josh was in a similar situation to many farmers who don’t have grain storage on-farm: lack of control.

“Prior to increasing our storage capacity, the vast majority of all grain went off-farm during and after harvesting,” explains Josh.

“This meant we weren’t able to market our grain effectively throughout the year.

“We were very heavily dependent on trucks, and with the location we’re in we’re very exposed to any weather changes – meaning roads would often be cut off.”

For Josh, it’s always been the plan to increase his on-farm storage as soon as harvest was going to happen.

The main thing he researched when looking for silo storage was the quality of the silo itself and the background of who was building it; reputation meant a lot to him.

“There were also things such as reports on the ease of unloading grain, support, and what future developments we could put on the silos – for example, bucket elevators or pumps – so we wanted to plan for that when making this decision.” 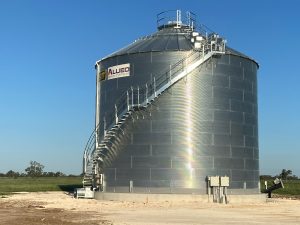 Josh found Allied Grain Systems through word of mouth; he’d also seen a number of silos in his district and liked the look of their size and capacity.

“A friend of ours spoke about his silos which were from Allied Grain, and he was very happy with the results and how it all worked out.”

Josh purchased one flat-bottomed silo to start his grain storage journey, which is one of the most cost-effective grain storage solutions out there.

“Depending how we go with this silo, we might continue to add onto the pad to gain greater control.”

At the same time, he was also looking for an auger; his team didn’t have one on-farm that they’d be able to connect to a new silo.

“We looked at the second-hand market, and the main thing we pushed for was the extension aspect – it was something we were made aware of through Allied with the AGI auger.

“Prior to that I was looking at a drive-over hopper system which would have cost an absolute fortune.

“This AGI auger has facilitated the speed of unloading when all headers were going during harvest and the trucks were backed up. We could just keep plugging away and keep the grain away from the paddocks – the harvester didn’t stop.”

Why does this investment make economic sense for Josh’s business?

“The financial repercussion of having your grain off that paddock during a volatile year is astronomical. What we’re able to do as far as trading and hedging our grain throughout the following year makes great financial sense.

“We’re able to utilise that like we’ve never been able to before.”

How would Josh describe his experience with the Allied Team?

“The team were great, very thorough, and delivered. They kept in very regular contact, especially during the build.

“Our silo was sealing off just as I was putting grain into it, so it was right at the end of the installation that I already needed it; I was quite impressed by the workmanship and how the whole thing went.”

Are you looking for the top cost-effective solution in on-farm grain storage? Look no further than Allied Grain Systems! View the features and benefits of our flat-bottomed silos here. 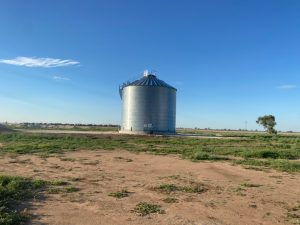